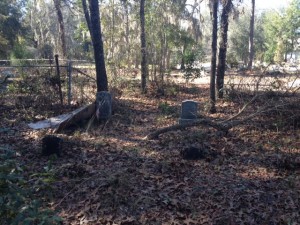 How I found it, once again……

Over two years ago, my husband and I relocated to Keystone Heights, Florida, returning to live on family property that was purchased some hundred years earlier by his family.  Not long after arriving, and with much persistence on my part, we take a short trip to an old cemetery to locate one of Florida’s First Pioneers.  Jonathan Knight, who arrived with his family in Florida in 1843-44 is my husband’s gr. gr. gr. great-grandfather.  He settled in the area then known as Black Creek, which is now part of Middleburg.

Upon arriving at the cemetery, I noted its separate cemetery signs with two (2) different names, one being Forman Cemetery, the other Fowler Cemetery.  As we looked for his ancestors graves, my first impression was that the cemetery was well maintained.  We start our search checking one then the next, reading the names and dates, but finding no success.  Frustrated, we begin to leave.  As I turn back for one last look, I notice an area in the corner, mounded with leaves, dead limbs, and debris from the other graves (old plastic flowers) that had been discarded.  At first glance I thought it was only a trash pile.   I walk closer and I notice first one head stone and then another.   I walk around to view the names as they are facing away from me.  As I read the names, instead of being excited that I had found his ancestors, my heart sinks.  One headstone reads Jonathan Knight, the other of his wife, Elizabeth.  My emotions erupt as it is devastating to find their graves in such condition.

My first thoughts…..Why was the other part of the cemetery freshly mowed, free of debris, while their graves are among the trash pile?  Who would do such a thing?

Appalled and without answers, we schedule a day to return to clean up the area which clearly seemed to be purposefully neglected.  We remove the debris, cut down vines as well as hanging limbs from the trees that have grown out of control and rake away the heap of leaves left to rot on top of the graves.  After several hours of work, the area looks like a gravesite once more, instead of the trash pile that we found.  For several months, I revisit the cemetery often finding it much as we left it, neat and without debris, yet I still wonder why their gravesite had been left in such conditions.

Within the next few months I find myself on a mission taking a Cemetery Rehabilitation and Preservation class, and become certified in the laws and practice of preserving historic cemeteries.  It included the do’s and don’ts of gravesites and what to use to clean and care for the headstone itself (depending on the era, there were many different types of materials used), the area surrounding the grave, as well as listing the cemetery within the historic registry.  After all, it was over a hundred-fifty years ago when Jonathan Knight was buried in Forman Cemetery.

For the next year or so, I continue to return, picking up any debris that might have blown into the corner where the graves were located.  Then for several months, I’m unable to return, for one reason or another.  But, this past Friday, on my way home from a trip to Orange Park, I’m driving through Middleburg when the resounding thought hits me.  “I should take a quick detour to check on the cemetery.”  As I arrive, I’m shocked to find debris thrown on top of the Knight graves once again. Large limbs are lying across one, with a sheet of plywood leaning against another, and trash strewn about.  I turn to look at the other areas of the cemetery and find it clean, and free of any debris.  As I turn back to the Knight graves, once again I’m left disheartened.

WHY WOULD ANYONE DO THIS?   I just don’t understand.