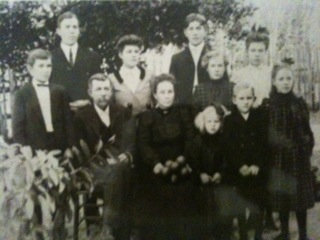 James Alexander Reaves was born on May 4, 1861, just before his father Daniel Asbury Reaves joined the 3rd Florida Infantry.  As a young boy, James arrived in Winter Garden with his parents, younger sister and brother along with his baby brother that was not yet a year old. James himself was only eight.

On June 4, 1884, James married Jimmie Tellula Donnie Letson.  Jimmie was born April 24, 1864 to Sethiel J. Letson and MaryAnn E. Dearing.  Her father, like James’ father Daniel was a Civil War Veteran.  By 1887 when James’ parents along with most of his siblings returned north to settle in Bradford County, Florida, James remained at Reaves Settlement in Winter Garden along with his younger brother Mark Bryan Reaves.  James was an established citrus grower and farmer who had acquired a vast amount of land.

James and Jimmie had nine (9) children.

Alberta (Ada Belle) Reaves was born in May of 1885. She would marry Dudley Lanier Clyatt by 1908, in Worthington Springs, Union County, Florida.  Dudley was the brother of Samuel “Dee” Reaves’ wife, Mattie.

Visit Us on Facebook
The Second Son – Daniel Asbury Reaves

Our Responsibility to our Ancestors Gravesites
Scroll to top